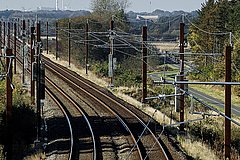 Control of railway electricity network of the Danish railways with PSIcontrol

Berlin, 9 January 2018 - PSI Software AG supplies the Danish rail infrastructure company Banedanmark, Copenhagen, with the new railway electricity control system based on the PSIcontrol network control system. In the future, this system will be used to visualize, monitor and control the Danish railway network nationwide.

The use of the modern railway electricity control system from PSI makes a significant contribution to the reliable operation of the Danish traction power network. For optimum customer service in Denmark, PSI has set up its own site in Roskilde.

The implementation of the project should be completed by mid-2019. As part of Banedanmark's electrification program, additional rail lines will be added to the system and put into operation by 2029.

The railway electricity control systems based on PSIcontrol not only perform network control tasks, but also meet additional railway-specific requirements. Many of these solutions are already being used successfully by leading European railway network operators. PSIcontrol also complies with all IT security standards in accordance with the guidelines of the BDEW white paper and the ISO 27001 standard.